If you’re looking for the best legal movie streaming sites, then we’ve got the ultimate list for you.

We understand all too well how frustrating the slew of paid streaming sites with their exclusivity deals can be. These days, you need to pay for a handful of subscriptions just to watch your favorite movies legally!

Luckily, there are a few free options too. And we aren’t talking about torrent sites – we’re talking about those free streaming websites where you won’t have to worry about receiving a DMCA notice for copyright infringement.

Tubi TV has one of the biggest online streaming libraries, with more than 50,000 movies and TV shows. Like others on our list, Tubi TV relies on its partners to legally source digital rights and host independent films that are independently available online.

However, freedom comes at a price. Tubi TV relies on advertising to cover its hosting expenses and reserves the right to share select user information with its partners, as per the Privacy Policy. You’ll also receive marketing emails, though you have the option to unsubscribe from these.

For this reason, it’s recommended you use an anonymous email (such as ProtonMail) when registering. We also advise using one of our recommended best VPN services to enhance your online privacy while streaming via Tubi TV.

Sony Crackle isn’t the biggest of the free, legal movie streaming sites, but it is one of the best. With the brand-trust behind the Sony name, Crackle has been able to partner with several big-name production companies, such as Warner Brothers, 20th Century Fox, and MGM.

The streaming service also had a long-standing partnership with Disney. However, thanks to the recent launch of Disney+, you’ll no longer be able to find your favorite Disney movies on Crackle.

Crackle also isn’t available globally, unfortunately. At present, the service is only available in the US and Australia, though there’s a paid subscription option for Latin American countries as well. This, coupled with the huge number of ads, means you’ll need to use a VPN to get the most of the service.

While the quality is great (1080p) and the selection of movies and TV shows tops 2,000, Vudu has a couple of catches. First, you need to create a free account before being able to stream any content (compared to Tubi TV). And second, not all of the content is actually free.

However, there are several titles in the free section that don’t seem to be available on Tubi TV or Sony Crackle. And while there are ads, there aren’t nearly as many as Crackle throws at you.

As it stands, the only reason you’ll want a VPN for Vudu is to protect yourself from their Privacy Policy. Vudu is owned by Walmart and has to comply with California law.

Popcornflix is a bit of a wild card entry, as the video quality isn’t always consistent. However, there’s a decent selection of titles, including a few foreign films. There’s also no requirement for a subscription.

As Popcornflix is owned by Screen Media Films, there’s a steady influx of movies distributed by SMF. The service also seems to be relatively ad-free – though of course, there are a few.

While you can’t opt to use subtitles, for foreign films they are made available automatically. Popcornflix also boasts a few film school originals and web series, which you’d be hard-pressed to find elsewhere. 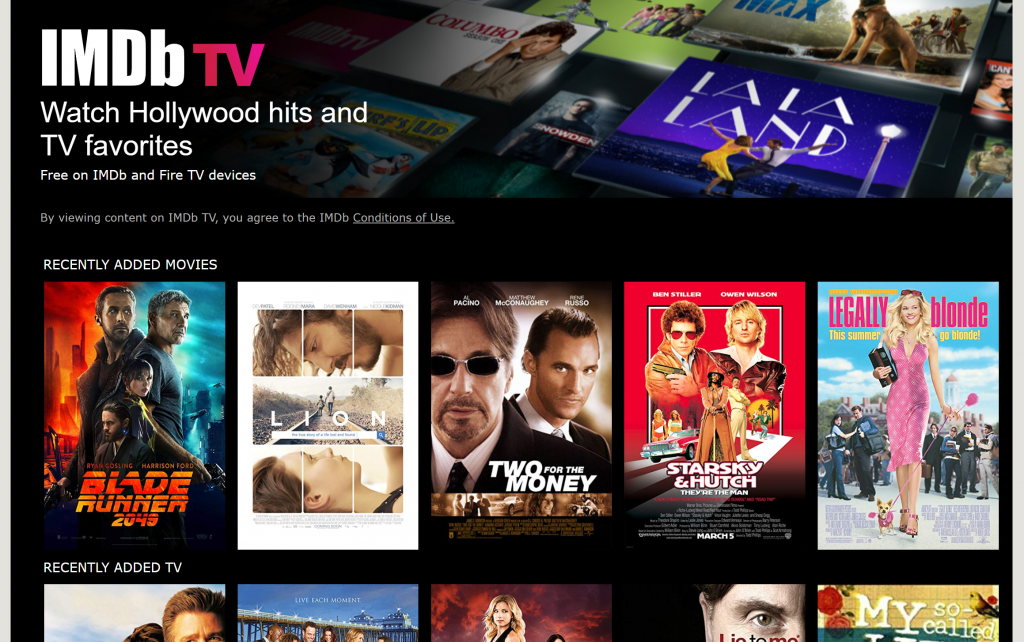 Even though we’ve put it at number 5 on our list, IMDb Freedrive is easily one of the (if not the) biggest legal movie streaming sites available.

However, it comes with a few pretty big catches. For starters, you need to enable DRM (Digital Rights Management tools) to stream anything. While this does make sense for an online streaming platform, it also means you won’t be able to download your favorite movies to watch offline.

You also need to create an account, or use your Facebook, Google, IMDb, or Amazon login details (Amazon owns IMDb).

But perhaps most restrictive of all, IMDb Freedrive is only available in the US, with no plans to launch globally. Even if you are based in the US, using a VPN is highly recommended. 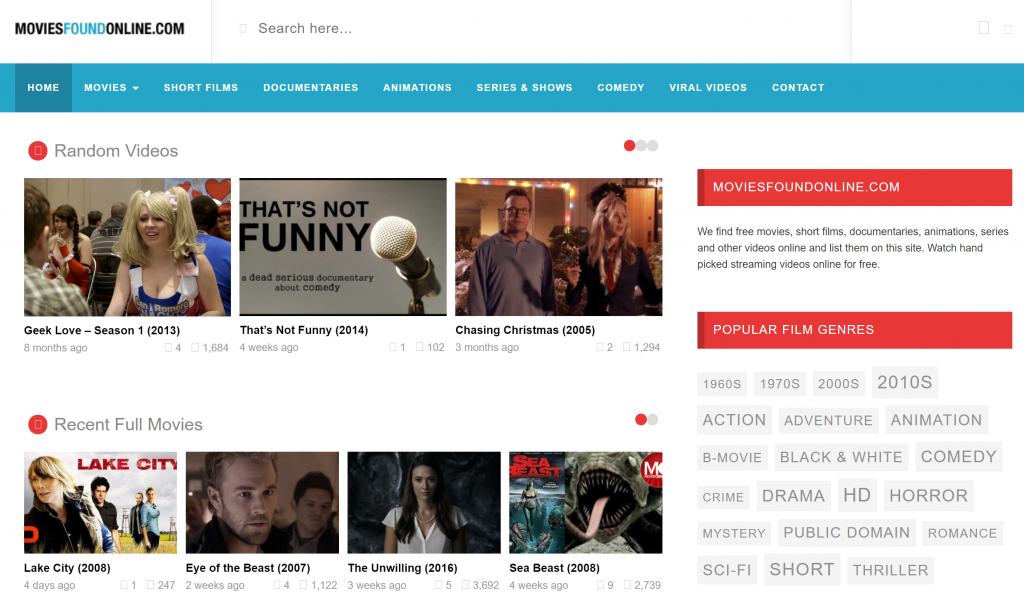 Movies Found Online (or MFO for short) is one of those services that crawl the internet to curate a list of freely available streaming content. While there’s a heavy focus on independent films, you’ll also find a decent selection of series, stand-up comedy, and other movies.

This comes with a couple of disadvantages, unfortunately; the biggest of which is that MFO is sometimes served DMCA notices.

This means you could be streaming a show you’ve come to enjoy… only to miss out on the remaining episodes. It also means you’ll want to use a VPN, to avoid any legal issues resulting from your use of MFO.

Second, as MFO doesn’t host any of the films, you’ll run into buffering issues fairly regularly. Playback quality can also be something of a problem.

On the plus side, there’s little to no advertising and subscription is optional.

Pluto TV is somewhat distinctive on our list by virtue of it technically being an online TV platform. Rather than focusing on movie streaming, Pluto TV generates the majority of its profit through long-form advertising on its 100+ TV channels.

Those channels include a wide variety of shows, including those by distributor Nickelodeon. However, many of them are also focused entirely on movies.

Additionally, Pluto TV offers a wide selection of On-Demand Movies, which you can opt to watch without needing to wait for them to play on one of the channels.

The downsides to Pluto TV include its limited number of Live TV channels and the lengthy advertising between programs. There are also some locations where Pluto TV isn’t available, so you may find yourself needing to use a VPN (especially while traveling abroad).

Coming in at number 8 is SnagFilms. While by no means the largest online library, there are reportedly more than 5,000 documentaries, independent film projects, and foreign films available.

As a result, there are a lot of obscure titles, which can make for a welcome break from the sometimes repetitive Hollywood output. At the same time, it can also limit you to re-watching cult classics you never have heard of before.

With that said, it’s still an impressive selection. Unfortunately, you also need to put up with slow loading speeds, unreliable subtitle support, and some rather intrusive ads. To limit just how intrusive those ads are, you’ll want to use a reliable VPN.

The Internet Archive would feature more prominently (due to its massive library), but the experience is bogged down by a difficult-to-navigate user interface.

With that said, there’s a truly impressive array of films and series to choose from. As the Internet Archive is a public domain non-profit organization, you can often find content that isn’t legally hosted anywhere else.

The entire idea behind the service is to preserve digital content at risk of falling into non-existence, after all.

Unfortunately, this comes with a few caveats. You won’t find any recent high-budget films, as most of the modern content is independently produced and without digital rights licensing. The playback quality is also highly dependent on the original upload, so you could get stuck with low-quality content.

On the plus side, the Internet Archive allows you to easily download your favorites to amass an offline library.

A VPN isn’t 100% necessary while using the Internet Archive, but is recommended for the same reasons you’ll want one while torrenting. 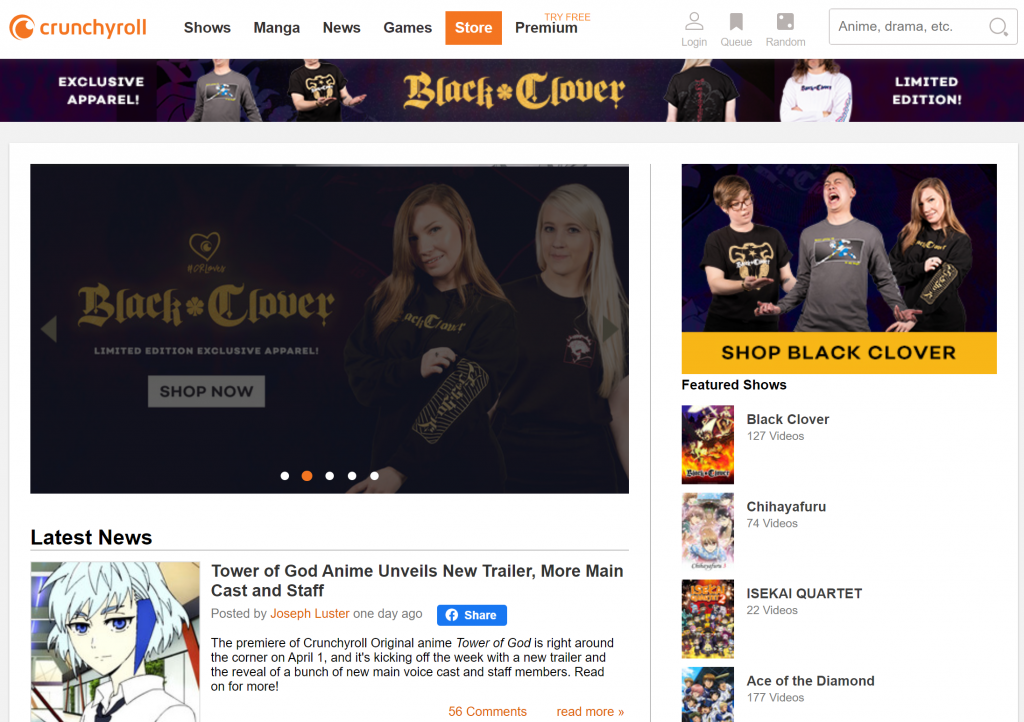 Last, but not least, is Crunchyroll.

We would feature Crunchyroll higher on our list, except that it’s a highly niche-platform catering almost exclusively to east-Asian content. While this makes it a great freemium option for anime fans especially, it’s not going to be worth anyone else’s time.

One major downside to Crunchyroll (other than the spam-like articles, poor website design, and a huge number of ads) is the fact free users have to wait a week before being able to watch newly released episodes. Premium users get immediate access – and better quality.

But if you don’t mind the wait (and the lower quality), Crunchroll is a great way to stay up-to-date on all your favorite anime for free. Using a VPN is definitely recommended.

While by no means an exhaustive list, we do hope this post proves you don’t need to resort to illegal means to watch movies for free!

If you’re looking for trustworthy VPN providers that can reliably overcome geo-location blocks, check out our guide to the Best Netflix VPNs. All of them are guaranteed to work with all of the movie streaming sites featured in this post. Or compare all VPNs to buy a VPN that suits all of your needs.