You might’ve read one of our VPN reviews and be wondering what we mean when we talk about the 5 Eyes, 9 Eyes, and 14 Eyes Alliance(s).

This guide is meant to act as a beginner’s guide to help you understand what these alliances are, how they affect your online privacy, and what you can do to protect yourself. 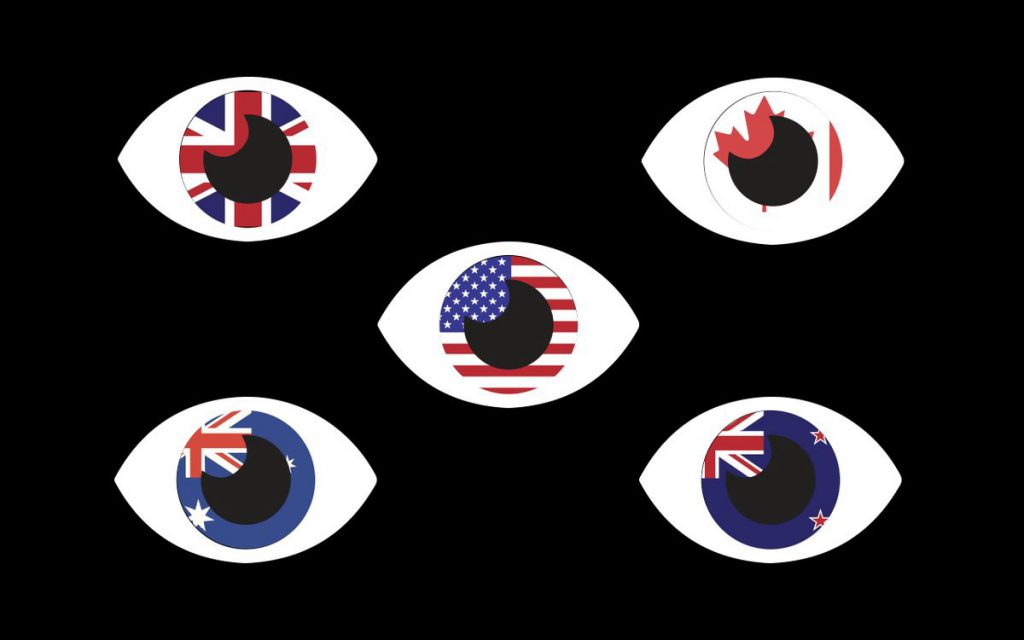 To start, let’s establish a basic understanding of what the 5 Eyes, 9 Eyes, and 14 Eyes Alliances are.

In truth, these 3 terms are all talking about an international collaboration between the intelligence agencies of each participating country.

These intelligence agencies collect the personal data of their citizens (and citizens of other countries, even non-participating ones) through a combination of government surveillance and dodgy practices.

For example, if you read our post on How Government Surveillance Kills Your Online Privacy, you’ll already know the NSA (National Security Agency) often forces manufacturers to add security vulnerabilities to their devices.

When manufacturers can’t be coerced to add these “backdoors,” the NSA has been known to add them themselves or use third-party software to gain access to private user devices.

The main reason we use 3 different distinctions is because of the way this coalition was formed and (later) expanded.

However, it’s always safest to assume if your data is being gathered by any of these nations’ intelligence agencies (which almost always is the case, no matter where you live), other members have access to that information too.

The UKUSA Agreement and the 5 Eyes 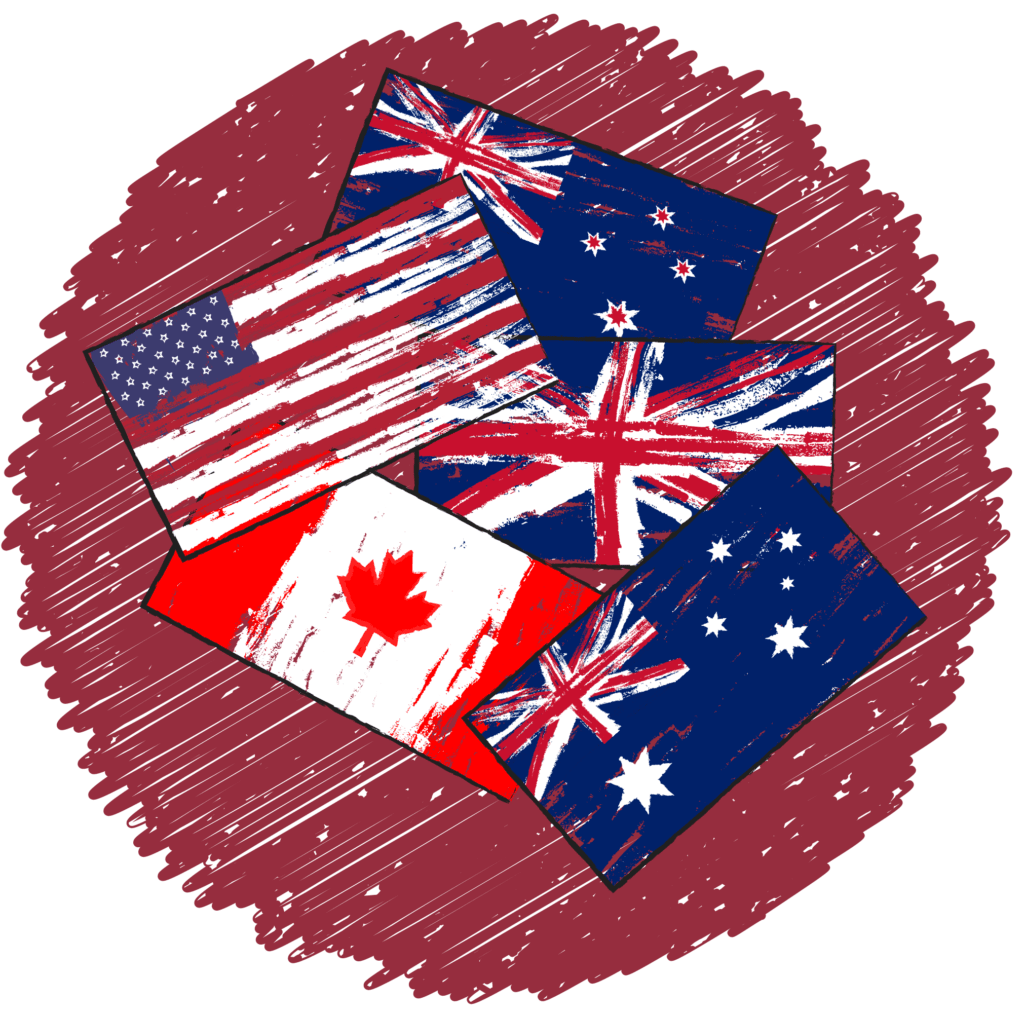 The UKUSA Agreement was only officially adopted and enacted in 1946, but finds its origins as an informal agreement based on the 1941 Atlantic Charter. It was meant to allow the intelligence agencies of the UK (including the Government Communications Headquarters – GCHQ) and the US (most notably the NSA) exchange intel more easily during the World War II efforts.

At first, the UKUSA Agreement was only between the titular nations. However, Australia, Canada, and New Zealand joined soon after.

The UKUSA Agreement was typically marked “FVEY,” which is shorthand for the “AUS/CAN/NZ/UK/US EYES ONLY” classification. It’s from this abbreviation we get the term “Five Eyes” or “5 Eyes.” 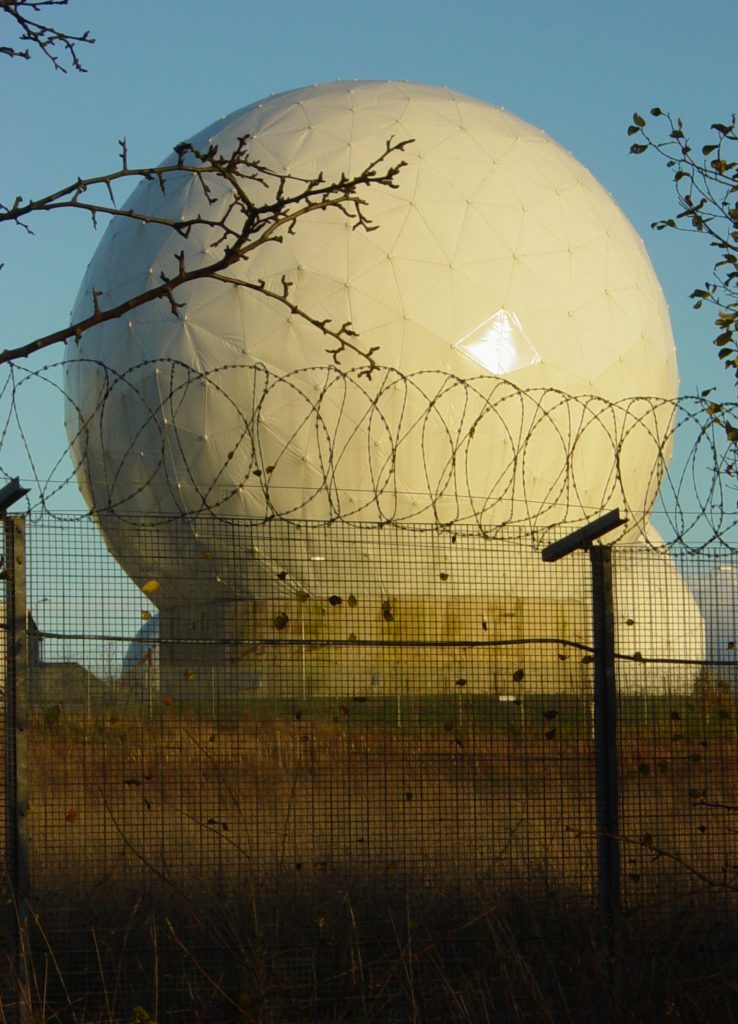 It was during the earliest stages that the UKUSA Agreement was officially enacted, but in the late 1960s, the agreement became the foundation of another government surveillance program, ECHELON.

ECHELON, a seemingly randomly-generated code name, was originally meant only for use in monitoring and intercepting communications between the Soviet Union and its Eastern Bloc allies.

Formally established in 1971, it was almost immediately disclosed to the public by a whistleblower in 1972. However, ECHELON only really became public knowledge in the 1990s.

By that time, the Cold War was over and ECHELON had long-since been repurposed as a means of spying on the citizens of the 5 Eyes nations and the global population in general. 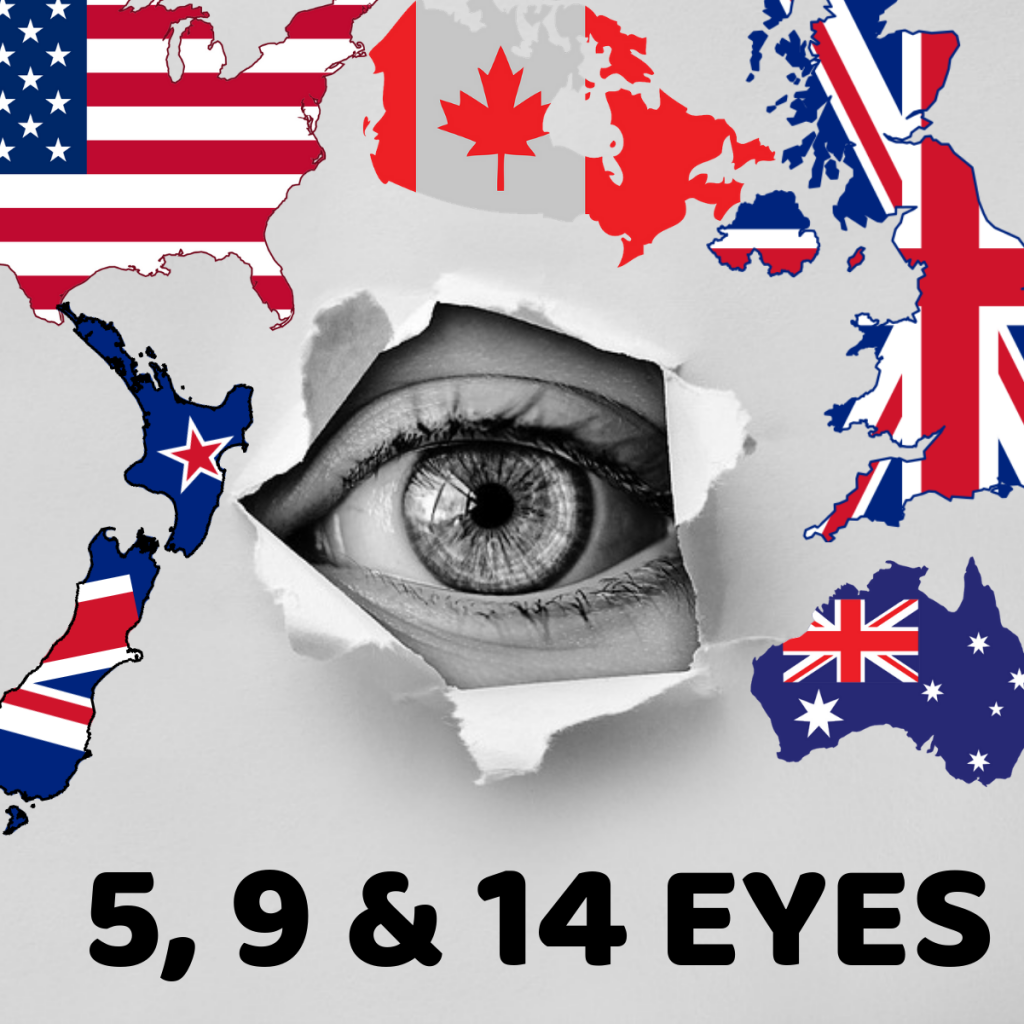 It’s difficult to pinpoint exactly when the 5 Eyes coalition was properly expanded to become the 9 Eyes and 14 Eyes alliances.

What we do know is it didn’t come about in the way you might expect: the 14 Eyes came first.

Essentially, the signal intelligence (SIGINT) agencies of Belgium, Denmark, France, Germany, Italy, the Netherlands, Norway, Spain, and Sweden were invited to join the intelligence-sharing activities of the 5 Eyes.

Officially, the 14 Eyes Alliance is known as SSEUR (the SIGINT Seniors of Europe).

According to Snowden’s leaks (and other documents that surfaced), there isn’t technically a formal SSEUR treaty. Instead, it’s a loose agreement made between the SIGINT agencies of participating members to trade information with each other.

The 9 Eyes coalition seems to be an exclusive clique within SSEUR, made up of the 5 Eyes agencies and those of Denmark, France, the Netherlands, and Norway.

Similar to the full SSEUR, there’s no formal treaty.

Data gathered by 9 Eyes members is not always guaranteed to be shared with the SIGINT agencies of Belgium, Germany, Italy, Spain, and Sweden. This does not make these nations any less likely to share their gathered intel, however.

In addition to the nations comprising the SSEUR/14 Eyes, there are other countries known to collaborate with 5 Eyes, 9 Eyes, and 14 Eyes agencies. Sometimes, these “third-party” allies limit their unofficial assistance to one or another of the 5 Eyes agencies, typically the NSA.

These third-party nations include Israel, Japan, Singapore, and South Korea.

There are a few other intelligence-sharing alliances worth mentioning, even though they don’t technically fall under the 5 Eyes, 9 Eyes, and 14 Eyes groups.

The first of these is the SIGINT Seniors of the Pacific. This is an intelligence-sharing coalition formed in 2005 by the NSA. SSPAC includes all 5 Eyes nations, with the additions of France (joined 2013), India (joined 2008), South Korea, Singapore, and Thailand.

It’s not entirely certain whether SSPAC data also gets shared with SSEUR partners.

Then we have the Shanghai Cooperation Organization. 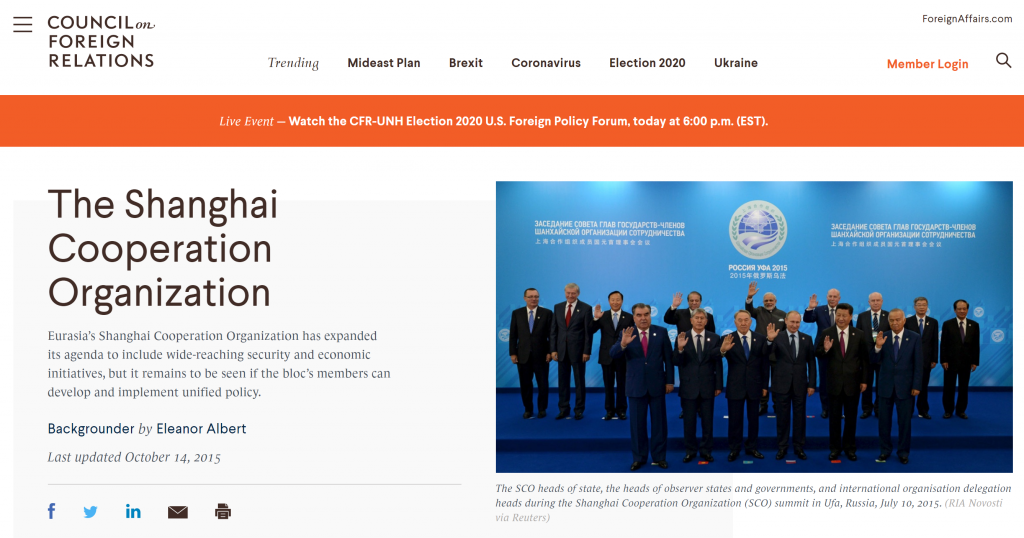 This is an entirely separate group with no real ties to the 5 Eyes, 9 Eyes, and 14 Eyes coalition. SCO is comprised of the intelligence agencies of China, India, Kazakhstan, Kyrgyzstan, Russia, Tajikistan, and Uzbekistan.

It’s important to note India is a member of both SSPAC and SCO.

While there’s no evidence to confirm such a suspicion, there’s a strong possibility India is playing both sides. If so, this would mean data shared by SSPAC members (which include 5 Eyes nations and France, which is a 9 and 14 Eyes member too) might be getting leaked to SCO as well.

It might seem paranoid to suggest such a thing. But all things considered, it’s better to err on the side of caution when it comes to protecting your online privacy.

What This All Means for You and Your Online Privacy

All told, the 5 Eyes, 9 Eyes, and 14 Eyes (SSEUR) alliances, as well as their unofficial third-party allies, SSPAC, and SCO (thanks to the possible link through India) form a massive global surveillance movement.

Basically, whichever participating nation has the weakest online privacy laws compensates for the stricter legislation of the other members.

Additionally, America’s NSA is easily the most invasive of all the participating intelligence agencies. 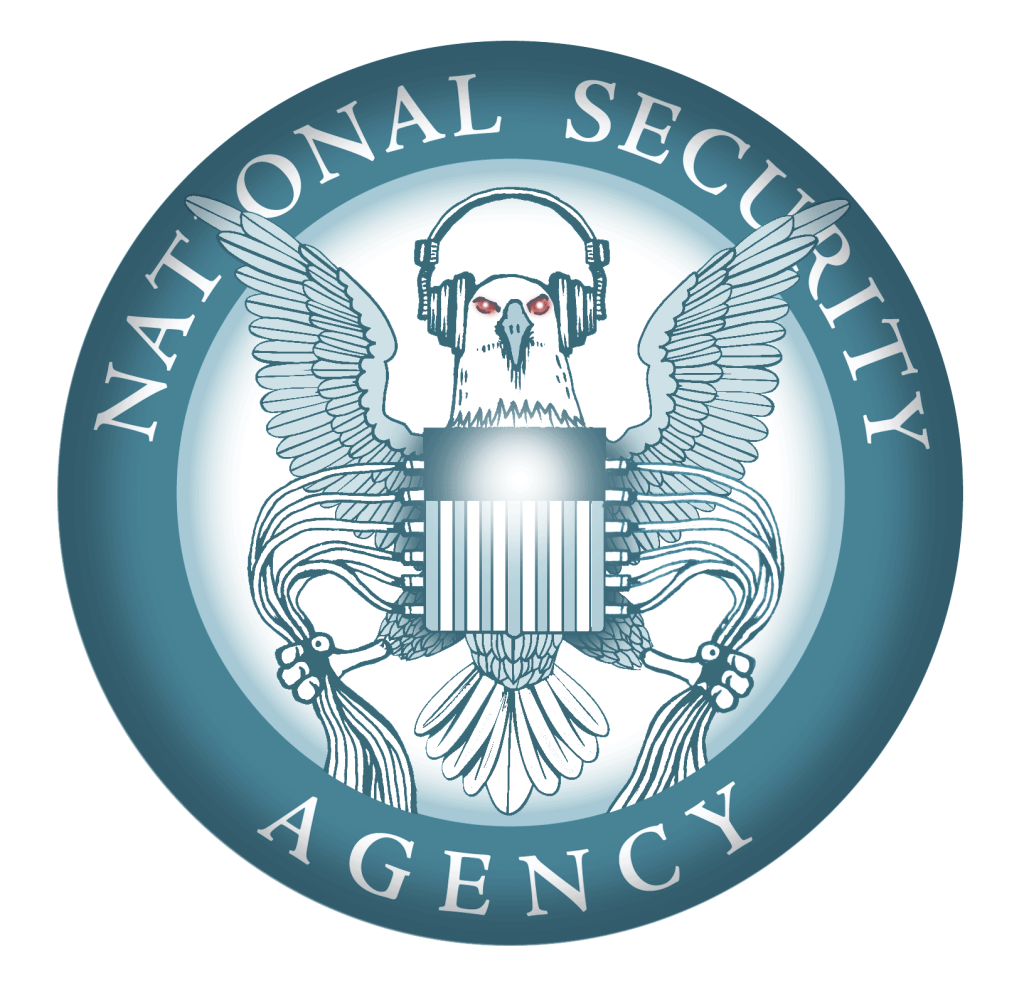 The NSA has a finger in every pie (including, once again, the tentative connection to SCO through its SSPAC alliance with India).

Not only that, but the agency (piggybacking on the UK’s GCHQ) wiretapped the international internet lines connecting every nation in the world. Furthermore, the NSA is also known to hack other countries’ internal networks, including those of other 5 Eyes, 9 Eyes, and 14 Eyes jurisdictions.

But what does this mean for you and your online privacy?

Well, it basically means unless you’re taking strong measures to protect your online privacy, it’s practically a given the NSA and at least 1 other agency recorded your online activities.

To repeat a point we made in How Government Surveillance Kills Your Online Privacy, Edward Snowden proved to us all that no matter who you are, those agents are going to find you suspicious at some point.

And that misplaced suspicion is all they need to continue spying on everyone under the guise of “national security concerns.”

What Can I Do?

If you’re properly understanding all the evidence presented in this guide (and its companion on government surveillance), there’s a good chance you’re asking yourself that question.

It’s even likely you came here because you were already looking for ways to protect your online privacy.

At The VPN Shop, we’re dedicated to helping readers like you find the answers you need. There are so many fake solutions being promoted by fake review sites that we felt compelled to help put the truth out there.

After all, your greatest defense against global surveillance is knowledge. Now it’s time to arm yourself with the tools and practices you need to continue.

This final section is an expansion of the “Quick-and-Dirty Cheat List” found in our posts What Is Online Privacy – And Why Does It Matter? and How Government Surveillance Kills Your Online Privacy.

Your first step is to stop using browsers like Google Chrome, Opera, and Safari. While these are among the most popular browsers available, they’re absolutely terrible for online privacy.

Instead, install a privacy-friendly browser like Mozilla Firefox or Pale Moon. 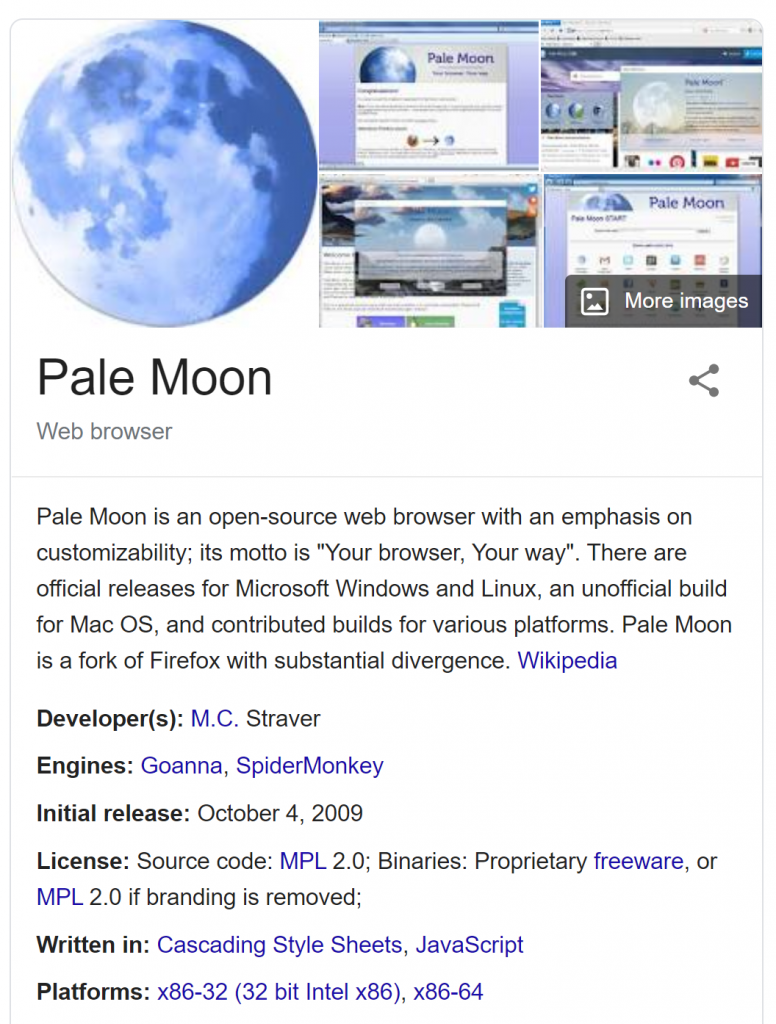 You could also use The Onion Router (TOR), a free proxy browser also based on Firefox. However, you’ll want to keep it as a second/third option and only use it with the TOR-over-VPN method.

Want a full comparison of different web browsers for online privacy? Let us know in the comments!

Now that you’ve got a more privacy-friendly browser to use, you need a search engine to match. Using Google, Yahoo!, or Bing kind of defeats the purpose, after all.

Both Pale Moon and TOR use DuckDuckGo by default, but you can easily make it your default search engine in Firefox as well. DuckDuckGo isn’t the only privacy-friendly search engine available, but it’s one of the best.

Want a full comparison of different search engines for online privacy? Let us know in the comments!

Be Smart with the Browser Plugins You Use

It can be temtping to use a bunch of browser plugins (also called extensions or addons) to help boost your online privacy. But too much of a good thing is a bad thing, making your browser easier to identify.

Instead, start with the basics:

There are others worth mentioning, but stick to these 3 to start with.

Want a full list of recommended browser plugins for online privacy? Let us know in the comments!

Gmail, Hotmail/Outlook, and Yahoo Mail are all known to leak your private email data to the NSA.

You can switch over to encrypted email services such as ProtonMail and Tutanota. Both have free and premium subscription options, with acceptable limits on the free versions.

Want a full comparison of different encrypted email services? Let us know in the comments!

Virtual Private Networks (or a VPN) are your best friend when it comes to protecting your online privacy. But you do need to be careful when comparing VPNs and choosing a provider.

We’ve got dozens of unbiased VPN reviews and guides to help you make the right choice. To get started, we recommend our Beginner’s Guide to VPNs and the Best Overall VPNs.

As global surveillance groups like the 5 Eyes, 9 Eyes, and 14 Eyes continue to spy on all of us, we need to stay updated on ways to protect our online privacy. You can stay in the loop by following our website for more reviews, tips, and guides.

Don’t forget you can always let us know what kind of content you’d like to see by reaching out through the comments.